British Red Cross volunteers have been working alongside local partners to support people affected by Storm Arwen, the worst storm to hit the UK for decades. 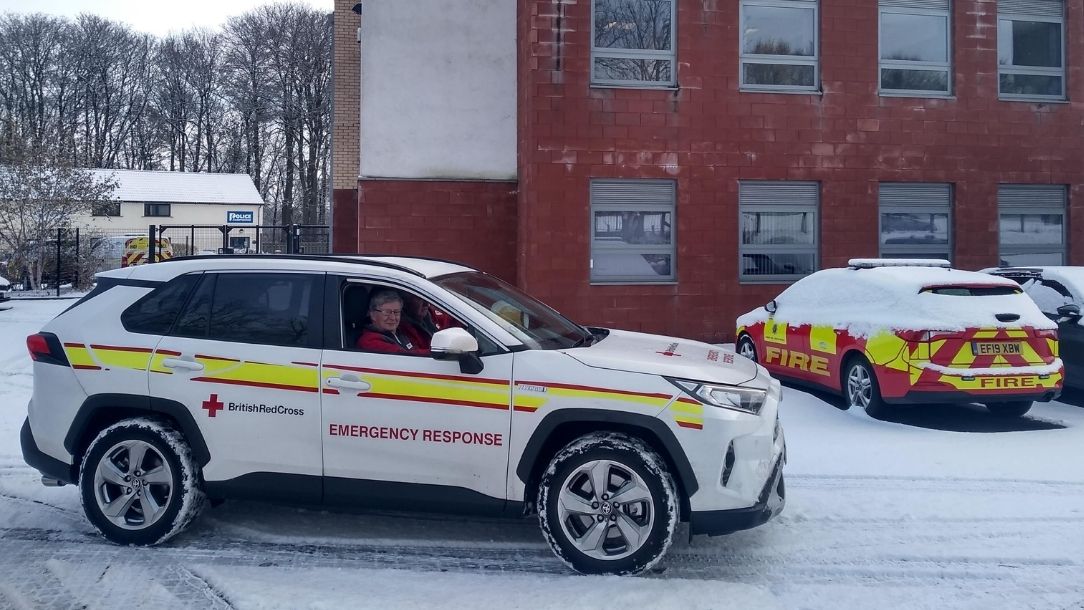 An Emergency Response volunteer on the way to support people affected by Storm Arwen in Scotland. Emergency response teams will be preparing for the oncoming Storm Barra too.

Storm Arwen wreaked havoc across northern England and Scotland when it struck the UK at the end of November.

Three people were killed as winds of nearly 100mph battered the UK, tearing down trees, damaging buildings and leaving more than 150,000 homes without power.

Blankets of heavy snow cut off access to homes in the worst affected areas, leaving thousands of people without basic supplies and heat.

And in the east of Scotland, train passengers were stranded for nearly 17 hours in sub-zero conditions, after travel was deemed too dangerous.

The damage is thought to be the worst in 20 years, with the Wear valley, Eastgate, north Northumberland, the north Peak District, Aberdeen and Perth worst affected.

Extreme weather events, like Storm Arwen, are happening more often and are putting more and more people in danger all over the world.

How is the British Red Cross helping?

British Red Cross volunteers have been working alongside local partners to support people affected by Storm Arwen, since it hit at the end of November 2021.

Throughout the course of Storm Arwen, which lasted just over two weeks, we deployed 63 emergency response volunteers and 34 community reserve volunteers supporting 3,164 people.

We also used 27 of our vehicles across Scotland to provide support for vulnerable communities who needed our help during this time. We set up rest centres and carried out door-to-door welfare checks in areas without power, working alongside 4x4 services, the police and community health and social care staff.

Our volunteers and staff provided information, food and other essentials including water, hot water, food, blankets, and torches.

Gordon and Sue have been visiting vulnerable people affected by Storm Arwen.

We worked with partners to contact thousands of people who are vulnerable and without power to identify and support them with any practical and emotional needs.

For some older people, who had been without power for several days, a knock on the door and a chat with a friendly face is a really valuable point of connection.

Cathie Sanderson and her mother, also from Cumbria, were supported by Red Cross volunteers. She said:

“We've got camping gas stoves and a little open fire, so we would manage, but my mum is 89. She's blind. She's nearly deaf. She's got Parkinson's. She broke her hip in April. She's got carers four times a day.

"I was having to go round to heat one room, and I've been cooking her food here on the camping gas stove and then taking it round at lunchtime.

I happened to be at mum's when the Red Cross knocked on the door. We had a chat and I let them know she would need assistance in the future. It was nice to know people were concerned.

Bob, an emergency response volunteer, had also been visiting vulnerable people. He says:

"I went to an 82-year-old lady. She hadn't had a hot drink for three days.

"When strangers come in with a friendly face, it just means someone cares. She just wanted somebody to talk to, a bit of company. She was happy by the time we left for the next job."

As long as people are affected by Storm Arwen, the British Red Cross will continue to work alongside local authorities and the local resilience forums to identify where the need is greatest.

David Taylor, emergency response officer in Cumbriahas been left humbled by the way in which communities have banded together:

In my 30 years in the Red Cross, this is by far the most complex operation we've been involved in. In Cumbria, I've been watching our volunteers working with folks who have lost power. The community response has been humbling.

“But it’s been heartbreaking to hear about cases of 90-year-olds on their tenth night without any hot water.

“In reality, we can't get to them all because the weather conditions have been appalling. We've had snow we've had ice and we've had to call in mountain rescue teams to help on some occasions.”

Robert Colburn, Emergency Response Manager at the British Red Cross said: "Our volunteers are our most valuable asset with the skills and knowledge that they have and are ready to response to emergencies all year round."

We help in an emergency at home and abroad. Storm Arwen is no exception. We respond to humanitarian need whenever and wherever we find it.

Donate to our disaster fund appeal