From World Cup to WWI hospital: the surprising history of English cricket grounds

But 100 years ago, our cricket grounds were hosting British Red Cross hospitals instead of matches and victory celebrations. 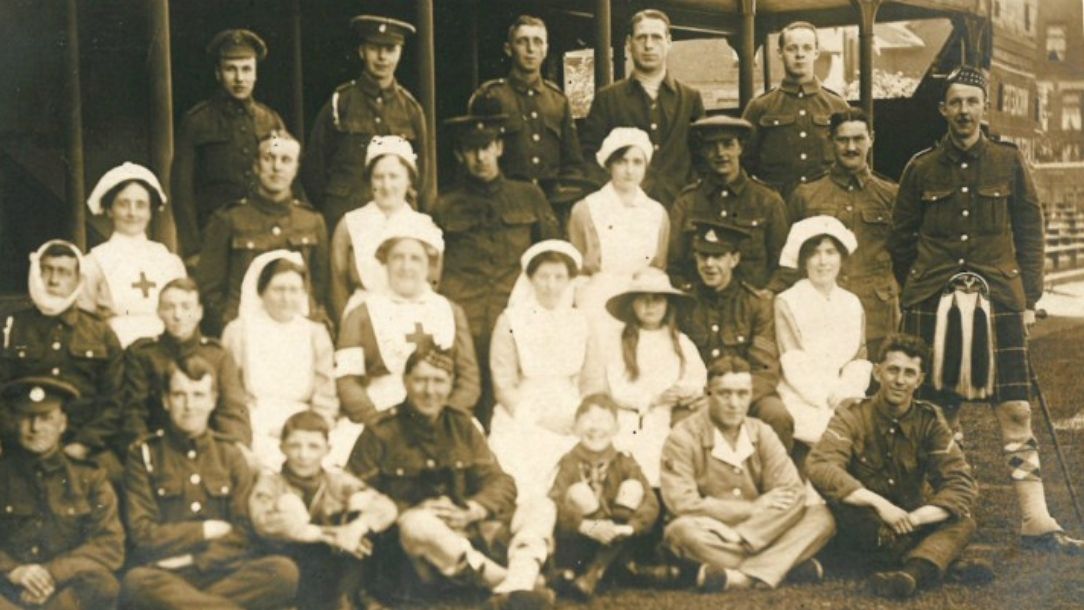 Some, like the Pavilion Hospital at Trent Bridge, carried on working into 1919 until the last servicemen recovered.

A century of service

The Trent Bridge Pavilion Hospital took in their first 15 patients in January 1915, most suffering from severe frost bite. There were two wards and some 30 beds, mainly in the main cricket pavilion.

By the end of the war, the hospital had treated over 3,500 servicemen. Two wards and many more beds had been added in what was then the Ladies’ Pavilion, now the Hound Road stand.

Although war ended in 1918, the hospital kept going until the summer of 1919, serving those still recovering from their injuries or illnesses. Some patients were still there when the County Championship matches started again in May 1919.

Trent Bridge, like most of the auxiliary hospitals, drew a wide range of local paid staff and volunteers known as VADs (Voluntary Aided Detachments).

Most VAD nurses were between 22 and 40 years old, single, and lived at the hospital. Many had never worked before. While some were paid a small salary, others were unpaid volunteers.

Before volunteering, these women would probably never have been alone with an unmarried man. Yet while all volunteers had to follow strict codes of behaviour, these young nurses suddenly found themselves washing and nursing wounded servicemen.

Our records show the amazing contributions of those dedicated volunteers who served with the British Red Cross.

For instance, we know that Miss Dorothy Burrows from West Bridgford, Nottingham, worked an amazing 4,428 hours from 1916 to 1918.

Miss Mary Green from Cropwell Butler, Notts, worked in the kitchen for £1.12.6 a week for two years. And Mr Arthur Brownsford from Nottingham drove an ambulance for a total of 660 hours over five years.

Perhaps the most famous volunteer was Lady Ellen Maud Bruce, wife of the 5th Baronet Clifton. Serving as the hospital’s president or ‘commandant’ for the whole time it was open, she was responsible for all buildings, equipment, stores and supplies.

On top of that, Lady Bruce oversaw the hospital’s finances and proved to be a very good fundraiser. Letters from the time also show that the patients liked her.

Yet despite being responsible for all VAD nurses when they were both on and off duty, hospital rules directed her not to interfere on the wards.

Lady Bruce was awarded an OBE in 1918 for her services to the Trent Bridge Pavilion Hospital and her portrait sits in the National Portrait Gallery.

The new plaque at Trent Bridge

Honouring Trent Bridge and its volunteers

This May marked 100 years since cricket matches started again at Trent Bridge after the First World War.

At that time, Nottinghamshire County Cricket Club honoured the wartime role of Trent Bridge and the many members of their community who volunteered or worked there. A permanent plaque at the grounds now reminds visitors of the important role the pavilion once played.

Like Red Cross volunteers today, the Pavilion Hospital teams were living the power of kindness.

As we cheer on the action this weekend, let’s pause a moment to remember cricket’s wartime contribution.