The man who took on the Nazis with a needle

Prisoner of war, top-secret spy and subversive stitcher – Cas certainly lived a full life. But his daughter had no idea about half of it, until she found a mysterious box in the attic.

An 85-year-old man wanders along a Greek seafront. He looks with interest at an open-air exhibition: huge, blown-up photos of a World War Two battle on this very island from 50 years earlier.

One photo shows a sea of weary men, bracing themselves for years of German capture. Only one face is turned, looking straight at the camera.

The elderly man stops. He lets out a gasp.

At this point in the story, his daughter leans forward to tell me: “He had an extraordinary gift for being photographed.” 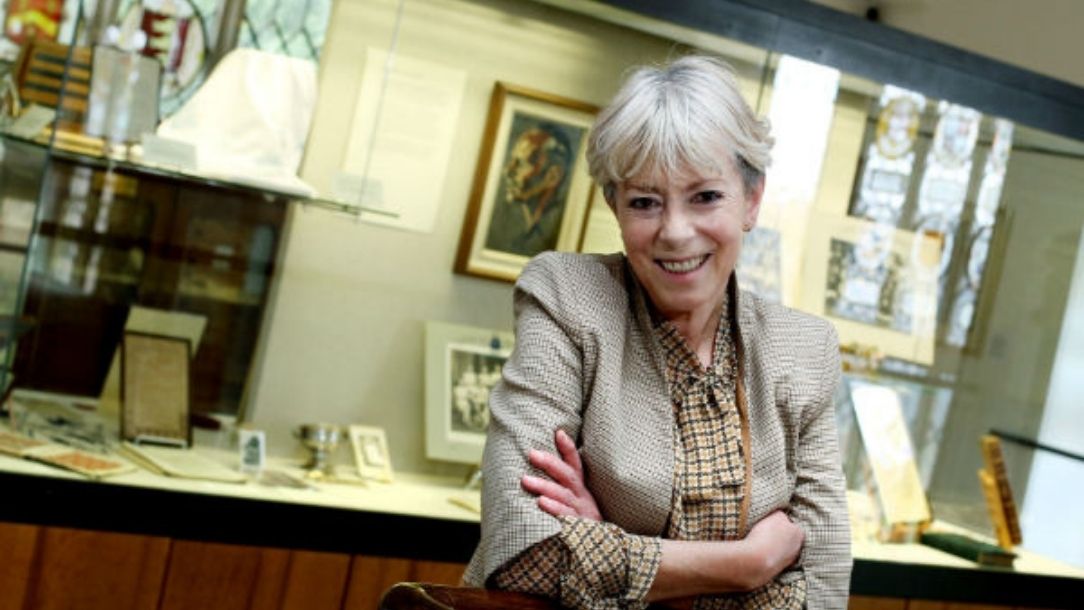 Alexis Casadagli in front of a display of her father's belongings, in his old school in Harrow.

Main image: The Red Cross took this photo in March 1943 for Alexis' family.

After everything I’ve heard, Major Alexis Casdagli’s knack for photos must have something to do with his extraordinary life.

This anglicised Greek, known as Cas, was a proud Mancunian – part of a powerful dynasty – who went to Harrow School.

When the Second World War broke out, he went to serve in the army, like countless others. He left behind a wife and young son.

Sadly, at the Battle of Crete, he was among the men forced to surrender.

That moment – caught forever in a photo – would lead to four-and-a-half years of capture and heartache.

However, it would also bring out great bravery and optimism – as his daughter, Alexis, discovered.

One day, Alexis had a sudden urge to read her dad’s diary from when he was a prisoner of war. He had by now, sadly, died.

Alexis was watching the rise of the far-right Golden Dawn party in Greece. She couldn’t believe it was all happening again.

She also realised she knew very little about her father’s life in the war – although the impact was always clear.

“He sang war songs in the car, devoured war books,” says Alexis. “There was a photo of the Dachau ovens on his bedside.

“And we had a reverence for food. None of us ever left a scrap. In fact, dad and I licked our plates.”

Although there was a copy of the diary in the Imperial War Museum, Alexis went to the attic to root around for anything more.

That’s when she spotted her father’s war box – perfectly preserved.

Opening the box, she found letters, lists, embroidery, photos. Not a single thing was torn or frayed. It was a treasure chest of memories.

Alexis has since spent years deciphering all of this information, putting together exactly what happened to her father all those decades ago.

She says: “At a certain point, I saw the diary as a jigsaw. I learnt to decode things. It was a living, complex record – and it helped me understand my father much better.”

This secret diary from 1941 was kept on pellets and scraps of paper, which Cas hid under floorboards and down his clothes. He logged everything – from the number of potatoes he ate to the stamps in his letters. Nothing escaped the meticulous chronicling.

After all, Cas was a spy.

He was recruited to M19 shortly after becoming a prisoner. Members of the undercover group considered it their duty to escape at any opportunity, or help others to do so.

M19 made various escape aids for prisoners, such as compasses slotted into pens and maps disguised as silk handkerchiefs. It sounds like something out of James Bond.

Cas’s role was less glamorous but extremely important. He was asked to take down and decode messages from the radio. These would change weekly, to stop them being broken by the enemy.

He also dabbled in a little political embroidery. A keen craftsman, he leapt on the silks and bits of canvas sent over in the occasional Red Cross box.

A defiant message for Hitler

Among Cas’s most prized creations was this large wall hanging. He’d stitched it from the wool of a fellow prisoner’s jumper. That winter was bitter, and many prisoners died – so the wool was a generous gift.

Who knew it said ‘Fuck Hitler’ in Morse code?

Cas hung this two-finger taunt to the Führer on the wall of various prisons, but nobody noticed.

The rebellious relic is all the greater for being made out of delicate thread.

“Sewing seems like a mawkish hobby,” says Alexis, “for pictures of pretty flowers. But I think dad realised the embroidery pieces were not easy to tear or burn. You could tuck one into your shirt or roll it into your kit bag. They didn’t wear out. I mean, how would you transport a watercolour? A carving? And you can’t get the detail in knitting.”

She adds: “The moment he was captured, he was resourceful. Dad wasn’t a novelist. He was injured early on, so he couldn’t escape. This was his way of being involved and making something for the future. Dad was keeping records, making time stamps. Every piece of embroidery is a historical document.”

The strongest theme in Cas’s ‘documents’ is sadly one of desperate hunger.

It clearly dominated the daily life of every prisoner.

Many of the men dropped a couple of stones in weight – some as much as seven.

No wonder it was a good day if a Red Cross food parcel got through to the camps.

Although it doesn’t sound too appetising, these life-saving packages were as sought after as champagne and caviar.

Alexis echoes this sentiment when she pauses halfway through our chat. “I feel a bit emotional,” she admits. “If it wasn’t for the Red Cross, I wouldn’t be here now.”

Despite this terrible hunger, gnawing away, Cas went for a run every day. The yard was a very small circuit, so he had to loop round several times – but he never dropped the discipline.

Cas’s diary also gives glimpses of surprising camaraderie and optimism. There are tales of putting on shows and keeping caterpillars as pets. One diary entry begins: ‘Today, I found a butterfly.’

How did he zoom into these flashes of hope – and not all the trauma and tedium?

Alexis has her theories. “I think he understood the importance of keeping up morale. It was a survival technique. You can make the best of the hardest circumstances, and rescue them through humour and good will.”

It’s here that Alexis chips in with a childhood story. They were on a family holiday on a Yugoslavian beach. Her dad sees a woman with an Auschwitz number on her arm. He runs to her straightaway, to pay his respects.

What was the lesson? “There’s a hierarchy of suffering – and yours might be nothing compared to someone else’s. It’s so important to understand that.”

A world moved on

Eventually, Cas’s wartime suffering – locked up and starved – would come to a close.

The Second World War was over. He was liberated by the American army. He was now 39.

Years had passed since he’d held his family, seen the British skies or talked to a woman. On the plane, he dreamt of eating gooey whipped cream in Lyons – a well-known chain.

Cas kept thinking about seeing Joyce and his little boy again. He was so excited. He didn’t even telegram them. He wanted it to be a surprise.

When the plane touched down, on 3 April 1945, Cas wrote of being “in an absolute daze

But although his life had been paused, the world had moved on without him. After stepping into his old Windsor home, he realised his marriage was over.

The next day, Cas caught a train to London and went to the war office. He asked for a job overseas – anywhere, but this place. He then went to Lyons, but could barely get the pudding down him.

Cas went on to become the first British consul in the port of Volos, on the Greek west coast. It was here that he met a beautiful redhead spy called Wendy, who worked in Special Operations.

Alexis was born in 1948, while Greece was in the grip of civil war. The couple christened her in the bell of an upturned warship in the harbour. Legally, it was British soil, so they could get her a passport.

Soon the fighting was so fierce that the town laid out the dead of both sides every Thursday. It was no place to raise a family – so Cas and Wendy brought Alexis to the UK in 1950.

After years of drama, Cas now settled down for a life of quiet joy with his precious family.

He ended up running a successful plastics moulding company – Perspex. It was a new and exciting material in the 1950s. After all, it made the barrels of parker pens, roof lights and even incubators for premature babies.

Outside work, he embroidered every day, for two or three hours, for the rest of his life.

“If more men embroidered, there wouldn’t be so many wars,” laughs Alexis. She thinks this hobby kept her father “modest, well-tempered, patient”.

His other gift was a tremendous capacity for joy. After all the horrors and hardship, he never took everyday life for granted.

“Whether he had a splash of aftershave or a drop of wine or a clean shirt, you could see his eyes shining – and that never changed.”


'Prouder than ever' book trailer 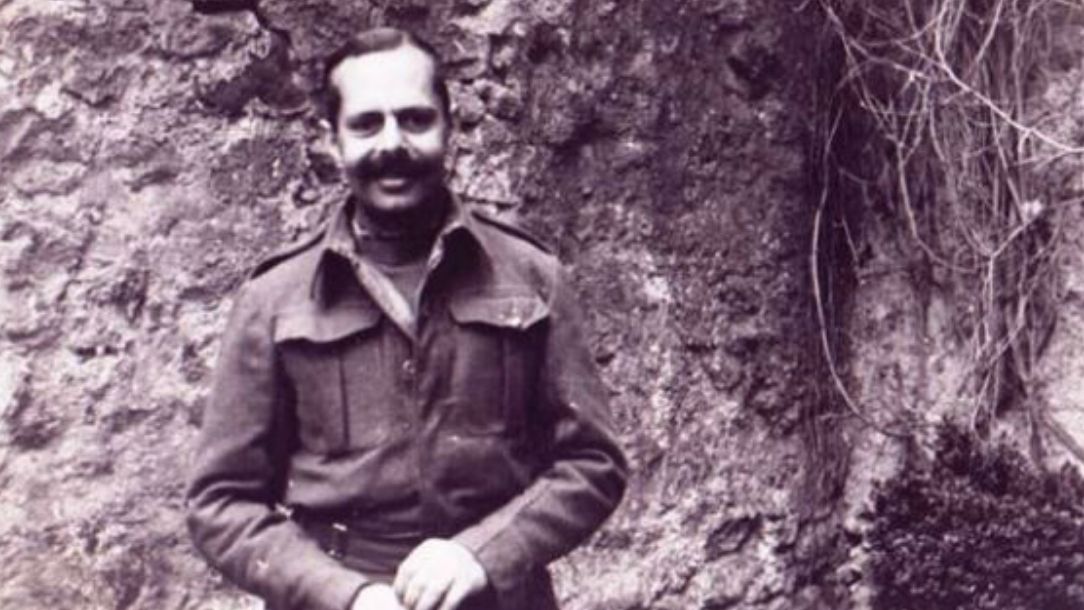