The crisis in Syria: 10 years on

Since the beginning of the Covid-19 pandemic, we have all had to live our lives differently.

Sadly, some of us have lost loved ones, and a great deal many more have been kept apart from friends and family, in an effort to help stop the spread of the virus.

It has been almost a year since our lives started to change. For the people of Syria, it has been a decade.

Ten years on from the start of the crisis in the country, more than 4 out of 5 Syrians (83 per cent) are living in poverty. The price of basic commodities has more than doubled in the last year alone and more than 90 per cent of the population is estimated to live beneath the poverty line. 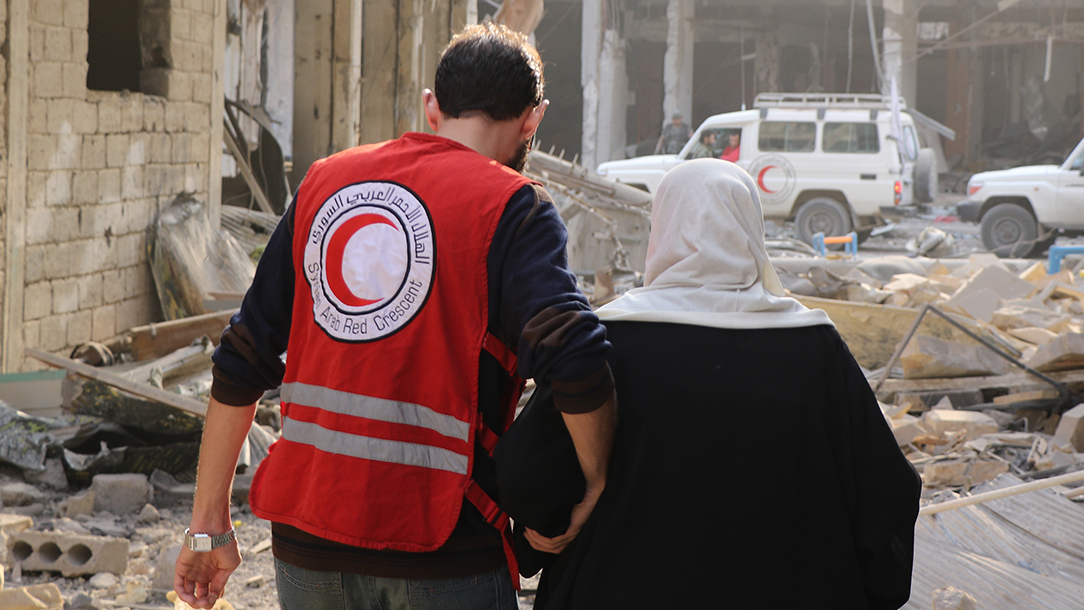 And with the Covid-19 pandemic continuing around the world, millions in Syria are unable to access the most basic items, including the clean water and soap that could help protect them against the deadly virus.

“For most Syrians, worrying about the virus is a luxury they cannot afford,” said Francesco Rocca, president of the International Federation of the Red Cross and Red Crescent Societies. “They cannot afford to protect themselves. They cannot isolate themselves at home or else no food would be on the table. And even if they do get contaminated by the virus, the health system has been battered so severely that access to treatment and care is limited.”

THE HEALTH SYSTEM HAS BEEN BATTERED SO SEVERELY THAT ACCESS TO TREATMENT AND CARE IS LIMITED.

Sadly, the road ahead in the country is unclear and it is expected that the situation will get worse for Syrians before it gets better.

The British Red Cross has been there for people in the country since the beginning of the conflict. We are still supporting Syrians today, and will continue to do so for as long as we are needed.

Providing vital aid to those who need it most

The Syrian Arab Red Crescent and the International Committee of the Red Cross are among the only major humanitarian agencies able to work across the front lines in Syria. That means we can provide vital aid to people in areas that otherwise would not be reached.

“For a decade now, people in Syria have been living in agony,” said Khaled Hboubati, president of the Syrian Arab Red Crescent. “As we speak, more than 13 million people need at least one type of assistance and about eight million people are unable to respond to their basic needs.”

FOR A DECADE NOW, PEOPLE IN SYRIA HAVE BEEN LIVING IN AGONY.

Syrian Arab Red Crescent volunteers are delivering 60 per cent of all aid in Syria, backed by dozens of National Red Cross and Red Crescent Societies around the world, and with the support of the ICRC and IFRC. Through the British Red Cross’s Syria Crisis Appeal, we have supported over six million people.

A long journey back

Thanks to our supporters, we can provide lifesaving support like food, blankets, mattresses, and other aid. Since the Covid-19 crisis reached the country, we have also been providing face masks, hygiene kits and food parcels to help families meet their urgent needs and protect themselves against the virus.


But Syria is not 100 people. It's 17 million. For those of us in the UK affected by Covid-19 lockdowns, there is a light at the end of the tunnel, with vaccines being rolled out and a tentative pathway back to normality on the horizon. But for Syrians who have lived through conflict for 10 years now, that journey will be a lot longer.

Conflict and coronavirus in Syria: what can be done?

Covid-19 reaches refugee camps: why we must act now

The climate crisis: why the world must act now

You can support people affected by the crisis in Syria. To learn more about how your donation could help, click 'DONATE' to visit our Syria Crisis Appeal page.