Neutrality and humanitarian need: the principles guiding the Red Cross in Ukraine and Russia

There has been misinformation and some false claims circulating about the International Committee of the Red Cross (ICRC) and its work in Ukraine during the conflict.

In addition, people have been asking questions about the visit of the ICRC’s President, Peter Maurer, to Ukraine and Russia in recent weeks, and wanting to understand more about its mandate to speak to all sides of a conflict.

Here we address these claims and provide information about the way the ICRC - and all Red Cross societies work – and how the principles of neutrality, impartiality and independent humanitarian action underpin this. 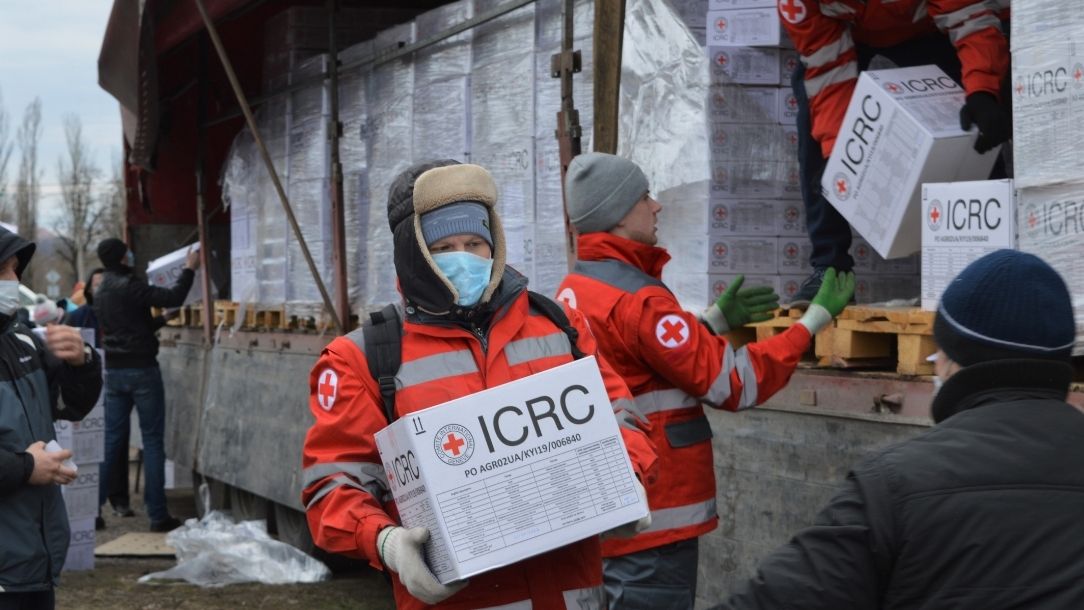 Vital supplies from the ICRC arrive are distributed by the Ukrainian Red Cross.

Sharing misinformation has the potential to cause real harm - for the Red Cross teams working on the frontlines, and for the people they serve. The level of politicisation of their work is jeopardising their ability to deliver desperately needed aid. Lives are at risk.

Comments and false information which have appeared on social media have been condemned by ICRC’s director general, Robert Mardini, as ‘a targeted deliberate campaign, discrediting the ICRC and its work.

It is crucial that we all share facts and not fiction.


The ICRC is impartial, neutral and independent

The ICRC is an impartial, neutral, and independent organisation. Its exclusive humanitarian mission is to protect the lives and dignity of victims of armed conflict and other situations of violence, and to provide them with assistance.

“This neutrality and international humanitarian law does save lives,” affirms Robert Mardini, ICRC’s director general. "At the end of the day, the rules of war, are the frontier between barbarism and humanity. So we will always keep pushing for this."

The ICRC has been supporting people in Ukraine since 2014

The ICRC has been working in Ukraine since 2014, supporting people affected by conflict. Since the recent escalation of the crisis, it has brought over 500 tons of medical supplies, food and relief items into the country to respond to skyrocketing humanitarian needs.

It will continue to scale up its work and now has teams in 10 locations across the country. It has more than 700 colleagues working around the clock in Ukraine to deliver aid and help victims of this conflict. To respond to the unfolding crisis, the ICRC has deployed additional teams to Ukraine as well as to neighbouring countries, including Hungary, Moldova, Poland, Romania and Russia, to support its operations and respond effectively to humanitarian needs where they arise. 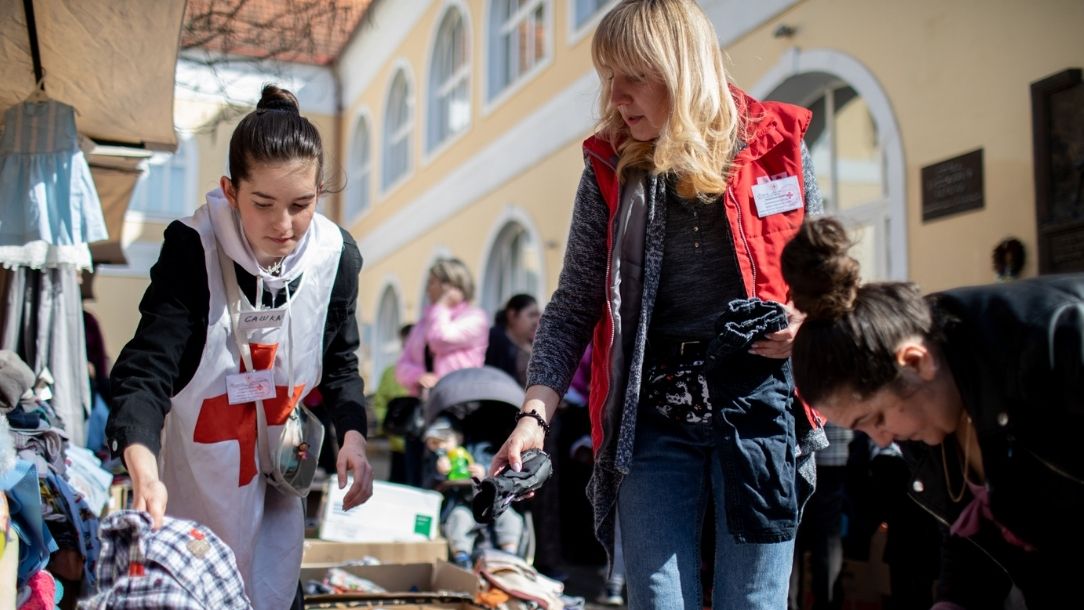 A Red Cross volunteer sorts through warm clothes for refugees sheltering at a station.

The ICRC speaks to ALL sides of a conflict

This dialogue is essential, because it allows the ICRC to advocate for the respect of international humanitarian law, to protect civilian life and to ensure aid can reach those most in need. Because of this approach, it can help people suffering from the horrors of conflict wherever they may be.

The ICRC is working hard to reduce the suffering of affected people through both assistance operations and diplomatic efforts. From 15 to 24 March, as part of these diplomatic efforts, the ICRC’s President Peter Maurer travelled to both Ukraine and Russia where he met representatives of the two countries to discuss crucial humanitarian needs. This included Prime Minister Denys Shmyhal in Kyiv and Sergey Lavrov, Minister for Foreign Affairs in Russia.

You may have seen a photo was taken and published by the news agency AFP (rather than the ICRC) of ICRC’s Maurer and Russian foreign minister, Lavrov. As stated above, Maurer met with representatives in Ukraine and Russia, and similar photos were taken in both countries. How the authorities communicate publicly is not something the ICRC can control.

Building and maintaining a dialogue with the different parties to a conflict is essential in ensuring the neutrality of the ICRC. This approach ensures the ICRC is not perceived as taking sides. It also helps grant the necessary security guarantees, so our teams can deliver aid in remote areas where affected communities desperately need assistance.

The ICRC never helps organise or carry out forced evacuations – and it will never. This applies everywhere it works. We would not support any operation that would go against people's will and these principles.

ICRC’s Mardini says: "The rules of war say that civilians must be protected everywhere, where the conflict is happening, and when they choose to leave because the situation is untenable, it should be of their own free will.

The ICRC organised the voluntary evacuation of civilians from the Ukrainian city of Sumy on 15 and 18 March, providing safe passage out of the city.

On both occasions, people willingly took buses to the Ukrainian city of Lubny.

It is also not true that we are financing 'filtration camps' in Russia. This is harmful and dangerous misinformation. The ICRC is not running refugee camps or any other camps in Russia.

There have been questions about whether money raised for Ukraine is being spent in and by Russia. The work of the Red Cross Movement is always used directly to help people affected by a crisis. Funding is not given to governments.

The British Red Cross works through a network of national societies which exist in most countries around the world, and also through the International Federation of the Red Cross (IFRC) and the ICRC, the latter working specifically in areas affected by conflict. Funds raised provide support to anyone affected by a crisis, wherever they are.

All money is used to address people’s humanitarian needs. 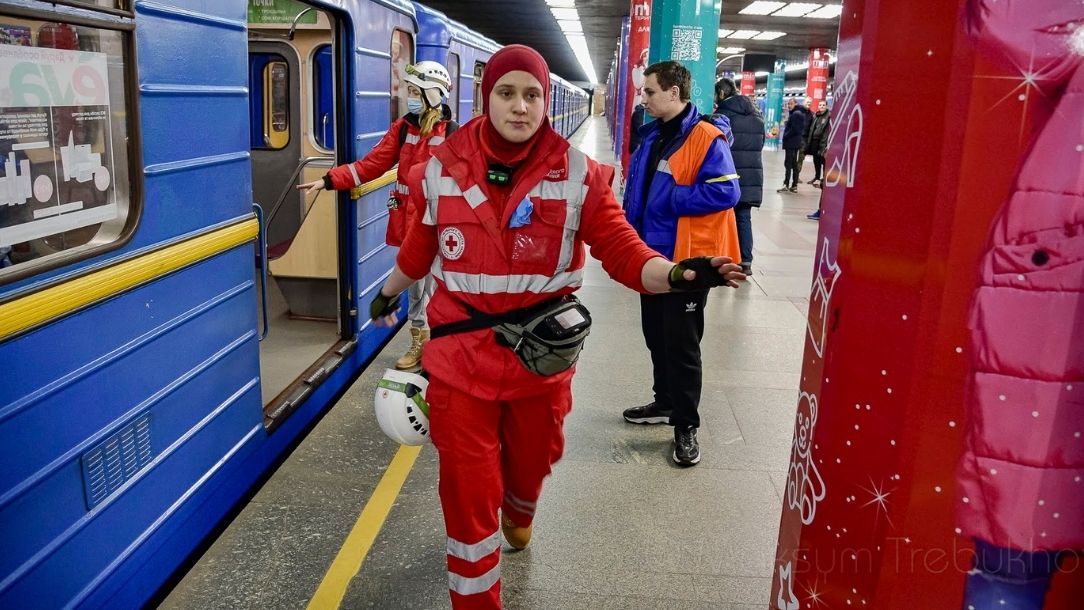 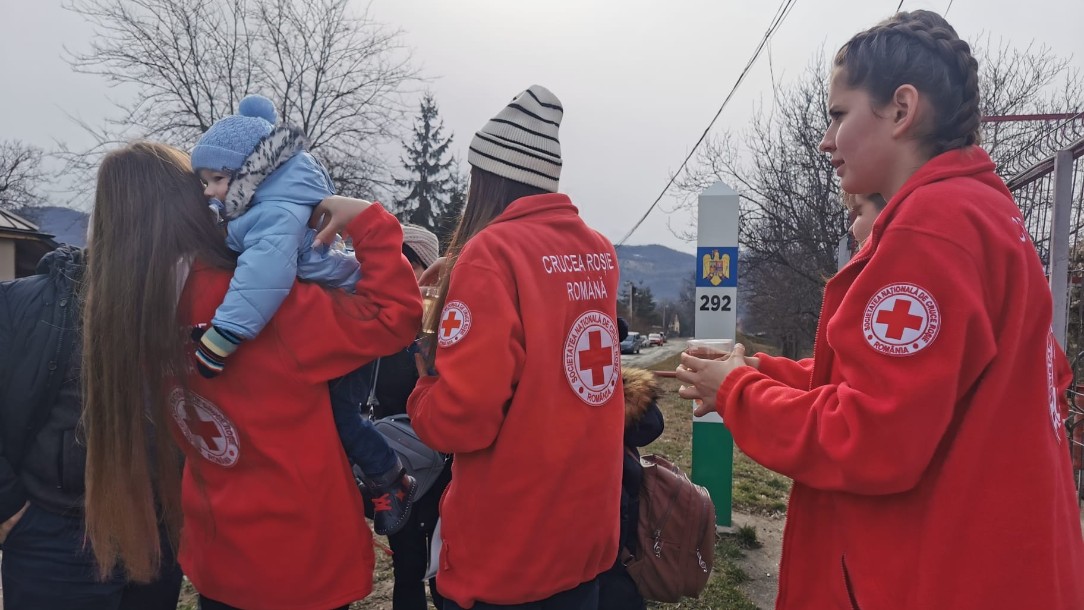 This regional delegation, based in Moscow and covering the Russian Federation and Belarus, is one of the ICRC’s key humanitarian diplomacy hubs around the world. It builds dialogue with the Russian authorities, academics, and other organisations in order to support our mission to protect and support people affected by armed conflict and other violence around the world.

The ICRC does not currently have offices anywhere else in the Russian Federation. It has an office in Minsk, Belarus.

ICRC’s current operational approach means it needs to have offices and structures close to areas of humanitarian needs in order to facilitate the delivery of relief assistance, and to support mobile teams. New offices are being established, and other offices may be opened.

Most recently, the ICRC has strengthened its response by deploying additional teams to Ukraine, as well as to neighbouring countries, including Hungary, Moldova, Poland, Romania and Russia, to support our operations and to respond effectively to humanitarian needs where they arise.

As part of this regional scale-up, it is discussing opening an office in Rostov in southern Russia. Having an operational base here would help the ICRC to reach people in harm’s way inside Ukraine. It gets aid closer to where people need it and that’s what the ICRC’s focus is. Because there is a conflict in Ukraine, the ICRC needs to multiply the points of access to get humanitarian aid in.

The ICRC does not want to open an office in southern Russia to receive or “filter” Ukrainians, as many reports are alleging. These reports are inaccurate and could cause huge harm to the ICRC and its staff.

Their priority is to ensure lifesaving aid reaches people, wherever they are.

These are the facts. Please remember that sharing misinformation has the potential to harm our people and everyone we try to help, every day, around the world.

As needs increase by the hour, the Red Cross' ability to deliver much-needed humanitarian assistance is being jeopardised by a surge of misinformation about its work and the role that it plays to alleviate suffering in armed conflict. Please support us in sharing facts not fiction – and speak up to address the spread of false information