As our Patron Her Majesty the Queen prepares the Royal Christmas message 2020, we take a peek at some of the quirky moments we've both shared.

At a meeting on 11 June 1926, the British Red Cross council sent hearty congratulations to the Chairman [Duke of York] on the birth of a Royal Princess.

That little princess, Elizabeth, would grow up to have a long connection to the British Red Cross. 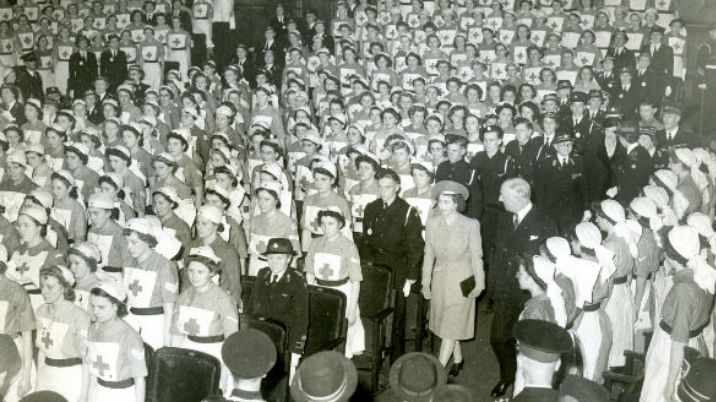 The Queen visits our volunteer conference, 1952

First aid teams were on hand again during the coronation on 2 June 1953. Around 1,500 hardy members of the British Red Cross were on duty. They stood in the rain for 10 hours, dealing with 1,089 injuries.

These included people who fainted and a boy who fell out of a tree, presumably while trying to get a better view of the event.

In spite of the appalling weather, officers and members displayed the greatest devotion to duty and the most unselfish and skilful interest in their patients,& said our annual report for 1953.

There was one benefit to the bad weather, though.

Happily, the cool weather reduced casualties in the Abbey to a minimum and the Red Cross officers on duty were able to witness the moving ceremony almost in its entirety. 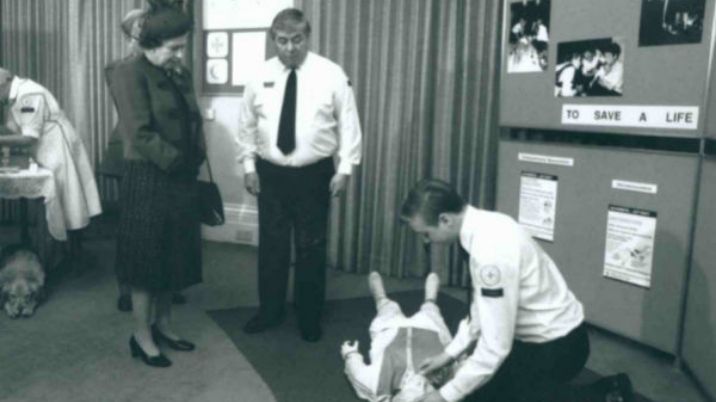 Young Wendy Englefield from Hampshire was chosen to represent the junior Red Cross in the service at Westminster Abbey.

"The Queen looked wonderfully beautiful", she said "and moved down the Abbey with great dignity."

Wendy had the perfect seat to watch the procession and admired Sir Winston Churchill who looked magnificent in his blue garter robes… the whole scene [was] like a fairytale.

Outside, nearly 50 boy cadets carried messages between the first aid stations in Hyde Park and by their alertness and efficiency acquitted themselves well.

Members of the junior Red Cross in Surrey celebrated the coronation week at various community parties. They entertained guests with a concert and by going round talking to everyone with a gracious and easy charm that won the hearts of all.

One of the children said: “It was the most lovely and exciting week of my life.”

The event proved that some things never change.

Graham Claxton, 28, was part of a volunteer team stationed on Millbank. He said: “It was a really jubilant atmosphere – everyone was so happy and excited.

"It was a bit wet, but we kept our spirits up."

Yes, I consent No, I want to find out more