From Ebola, to malaria to the worldwide coronavirus pandemic: let's hear it for the fantastic nurses who have looked after us through so much, and for so long.

A WW2 nurse shares a much-needed laugh with a patient

Florence Nightingale rose to fame after her work during the Crimean War. Like the British Red Cross today, she believed that every sick and injured person deserves help, no matter who they are or where they are from.

“A really good nurse must needs be of the highest class of character,” she wrote in 1881.

“Quiet, yet quick; quick without hurry; gentle without slowness; discreet without self-importance, no gossip.”

Around 90,000 people volunteered for the Red Cross in the First World War. Many of these were nurses. They worked in hospitals in the UK and overseas.

Peggy Arnold spent nine months nursing at Le Tréport in France. She recorded all the gory details of hospital life in a diary.

The ward was a place of “groans, and moans, and shouts, and half-dazed mutterings, and men with trephined heads suddenly sitting bolt upright . . . nearly every sheet showing signs of the wound, and face wounds showing pus at the side of their dressing.

“It was awful, and I really know now what war means.”

But hospital life was made brighter by the cheeky flirting and joking between the patients and their nurses.

Nurse Helen Beale wrote to her mother: “Another such nice boy in the ward comes from Lincolnshire and is the most incorrigibly cheerful thing you can imagine considering that he has lost his leg and part of his left hand has been blown away, too.

“He nearly made me lose countenance the other day when I was washing him.

“I was diligently rubbing his back etc when the jolly old YMCA man came in to bring the men parcels of fruit that he had brought up for them from the village.

“What must my boy say than ‘wouldn’t you like to be me, sir, lying here being washed by a nice young lady like this!’”

A bronze medal made by Fonson and Sons featuring portraits of Edith Cavell and Marie Depage.

Edith Cavell: the bravest WW1 nurse of all?

The death of a Red Cross nurse on 12 October 1915 sent shock waves around the world.

Edith Cavell had been pioneering new nursing techniques in Belgium.

She treated all soldiers who needed help, regardless of their nationality.

She soon began to work with the Belgian underground network. She helped more than 200 Allied soldiers to escape to the safety of neutral Holland.

Her dangerous work was discovered and she was tried for treason with 35 others in August 1915.

Despite an international plea for mercy, the 49-year-old was shot dead by a firing squad two months later.

The Red Cross journal at the time reported that Edith Cavell’s “patriotism, courage and dignity have caught the imagination of millions and will be commemorated for ages.”

During the Second World War, alongside their usual medical duties, Red Cross nurses used to dance with their patients. Learning dance helped injured servicemen to recuperate, building their strength and confidence.

After the war, the National Health Service (NHS) was founded in 1948. Hospitals often called on Red Cross volunteers during emergencies, epidemics and busy times (like Christmas), and to cover staff leave.

Today we do not provide nurses to UK hospitals but we continue to support the NHS. We help vulnerable patients get home safely and quickly through our assisted discharge service. 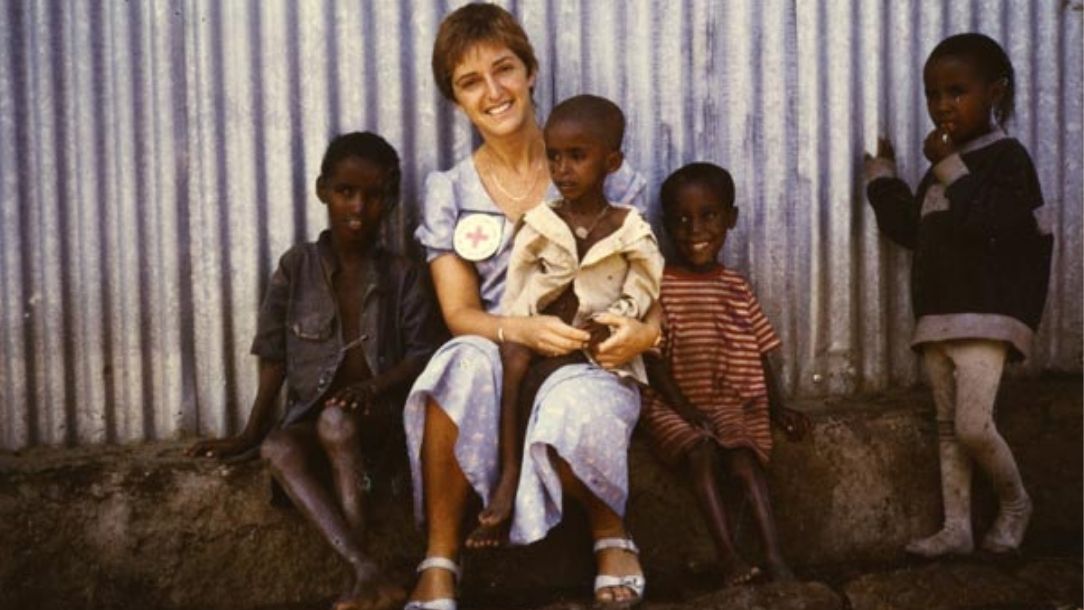 Claire Bertschinger: a nurse who worked with the Red Cross and who inspired Live Aid.

The nurse who inspired Live Aid

Claire Bertschinger brought Ethiopia’s devastating famine to the attention of the world in 1984.

Her interview with BBC reporter Michael Buerk lives long in the memory of those who watched it on television.

The British nurse was working at a feeding station in Mekele, Ethiopia, with the Red Cross. She candidly described having to decide which children to admit to the centre, knowing that those she didn’t were likely to die.

When asked how she felt, she replied: “What do you expect? It breaks my heart.”

Meet the brave nurses of today

We are so grateful to the many fantastic Red Cross nurses who work around the world today.

People like Claudia, who swapped her life in South London for helping patients during the conflict in South Sudan. She found herself treating gunshot wounds, malnutrition, malaria, diarrhoea, pneumonia, dehydration and landmine injuries.

“The work is completely different, you have to learn quickly and adapt while working with very basic equipment,” said Claudia.

“It is hard to see children and women with gunshot wounds. They are not involved in the fighting. They are just caught in the middle.”

Margie nursed Ebola patients in Sierra Leone. She witnessed many traumatic cases, but she has fond memories too.

“My favourite memory is of the woman who had just given birth to a wee girl. The mum had Ebola and she breastfed her baby. Thankfully, both of them survived.”

Margie’s experiences have made her more grateful than ever for the UK’s health service.

“I think we are so lucky to have such a great health service. We need to treasure it. When I hear people complain, I think ‘you need to see what others have.’ Our NHS is wonderful.”