A new museum display space has opened at the head office of the British Red Cross in London, significantly improving public access to our fascinating history and museum collection.

The exhibition follows the journey of the British Red Cross through the stories of people who have shaped our history and those who are part of our story today. The historical and contemporary items, many on display for the first time, hold memories of humanity, kindness and resilience.

The exhibition celebrates some of the lesser-known people and stories within the history of the British Red Cross.

It features women like Florence Nightingale, working as influential leaders from the very beginning of our humanitarian journey.

Florence Nightingale’s work caring for soldiers during the Crimean War was an inspiration for Henry Dunant, the founder of the Red Cross and Red Crescent Movement.

When the British Red Cross was formed in 1870, Nightingale joined the Ladies’ Committee, chaired by Princess Christian of Schleswig-Holstein, and participated in the work of the Red Cross throughout the rest of her life.

The work of women war artists has often been overlooked, but the British Red Cross Museum collection holds many artworks created by women, showing the crucial role they played in interpreting and documenting the First World War.

On display are some of the artworks by British Red Cross volunteers, allowing us to see the war through their eyes. These artworks capture the experiences of women who carried out humanitarian work in Britain and overseas.

Although driving motor vehicles was previously considered inappropriate for women, the war changed attitudes towards women as they successfully carried out jobs traditionally undertaken by men.

Some of the most fascinating and inspiring items in our museum collection are the creative objects made by people during crises.

These objects capture the incredible strength and resilience of the human spirit in challenging situations.

The Changi quilt was created by women internees in Changi Jail in 1942. The women worked together to create patchwork quilts for the wounded men in the hospital in the Changi prison camp.

Each contributor put ‘something of herself’ on a square. It was hoped that embroidering would relieve boredom and boost morale. Women whose husbands or other male family members were held separately also used the quilts to communicate.

For many men, the quilts brought the first news their loved ones had survived.

The exhibition also features objects made by civilian internees and concentration camp survivors during the Second World War (below left). Some were made using packaging materials from Red Cross food parcels.

Below right, these vehicle models were made by children in Angola in 1995, mainly out of Red Cross food aid tins. They were given to a British Red Cross delegate who worked as a field nurse in Angola.

The first aid and medical items in the exhibition highlight our significant work in relation to health, from promoting life-saving skills and healthy living to providing vital services and equipment needed to help people in times of war and peace.

Visitors to the museum can browse modern-day items like posters used to raise awareness around first aid skills and healthy living and promote kindness during the Covid-19 pandemic. It also features more historical items, like medical equipment used during the First World War.

This poster was produced by an overseas branch of the British Red Cross during the 1950s.

Staff and volunteers from our overseas branches have made, and continue to make, significant contributions to our vital peacetime work

To visit our museum, please book via email. Our normal opening hours are Monday to Friday 9am – 6pm.

We welcome school groups; please get in touch with us to discuss your visit. Entry to our museum exhibitions is free, and donations are welcome.

Profits from the sale of the book will go towards helping people in crisis.

Read more about the Red Cross 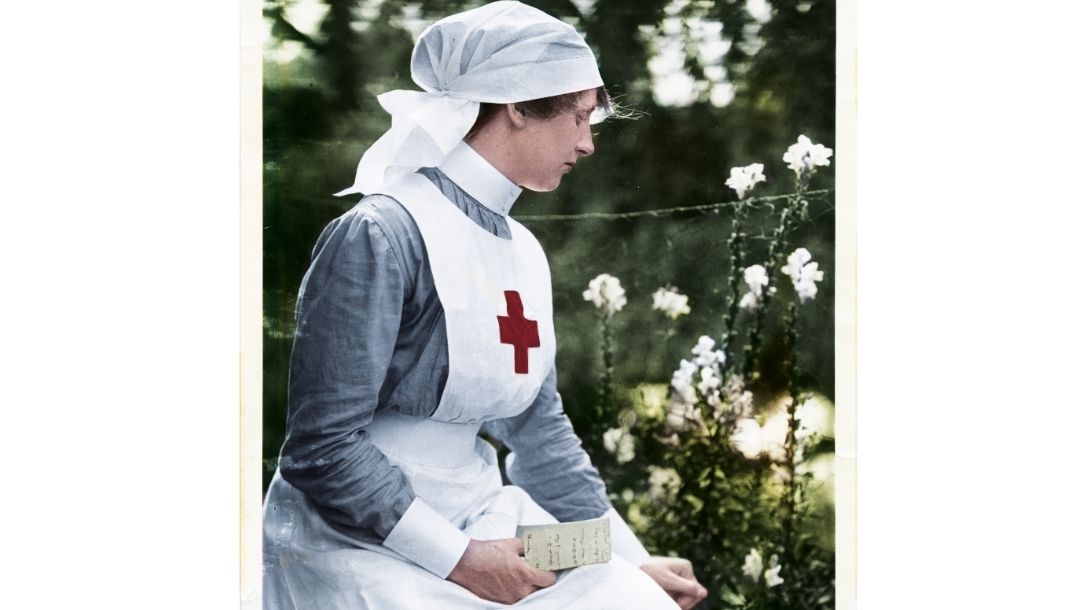 These letters from our archive show the challenges of nursing during difficult times, as well as some of the lighter moments.

From WWI to the coronavirus pandemic, let's hear it for the nurses who've looked after us through so much.

Did you know that during WWI, the Red Cross used trained dogs to help stricken soldiers on the battlefield? True story.